Will need a Xbox 360 controller.

The user will still need to use the mouse and keyboard for interaction with other characters in the game, as well as, navigating the main menu.

This article contains a Stinky Snake fast track through the general level maps of the game as well as showing a red path from beginning to exit.  For more information about the game, check out the User Manual. The red lines showing a quick way out of the level is of more importance that the clarity of the images included. They are meant to be fuzzy.

This level introduces a denser level design. So, a quick out of this level would be to turn left and try to get to the top of the level. Be sure to stop by the church halfway up. Then travel all the way to the right; this is where the Player (Snake) encounters the boss Skunk for the first time.

This is more of a flat level. You will need to collect limes for when you meet the witch later in the level. The lime trees are located at the topmost platforms. The witch has a clover that you get from her the second time you come close to her. I would suggest getting the reward for the limes, going past her and then coming back. The clover will be revealed — which the Player grabs. At this point, you will be near the end of the level.

The lime trees are mostly located up high. You will need these for the Hotel and surrounding suites. This is another horizontal level.

The leprechaun is introduced in this level. This level signifies the start of the more complex levels. The key to getting through and out of this level is to go to the right to the third mini-platform, up, to the right all the way and then take a mystery plant up quite a bit. Continue to the left slightly and then right a little bit to the exit.

This level is flat– there is an Old Mill monument about halfway through way up high.

This is one of the less dense levels — more monuments, just keep going to the right.

Another flat level with the first battle between the Player and Skunk. The level ends when Skunk is hurt but not completely eliminated.

Another complex level. Take a right all the way and then up to the exit.

Go left, up all the way, and to the right to the exit.

Taking multiple right turns to make it to the top right corner of the map–to the final battle.

The above level maps can help guide the Player through the game to find Stinky Snake. Please note that in Levels 12 and 17, the Player encounters the Boss, Skunk, and jumping on the boss has no effect like it does with the other skunks throughout the game.

Any question or comments, feel free to email at info@stinkysnake.com. 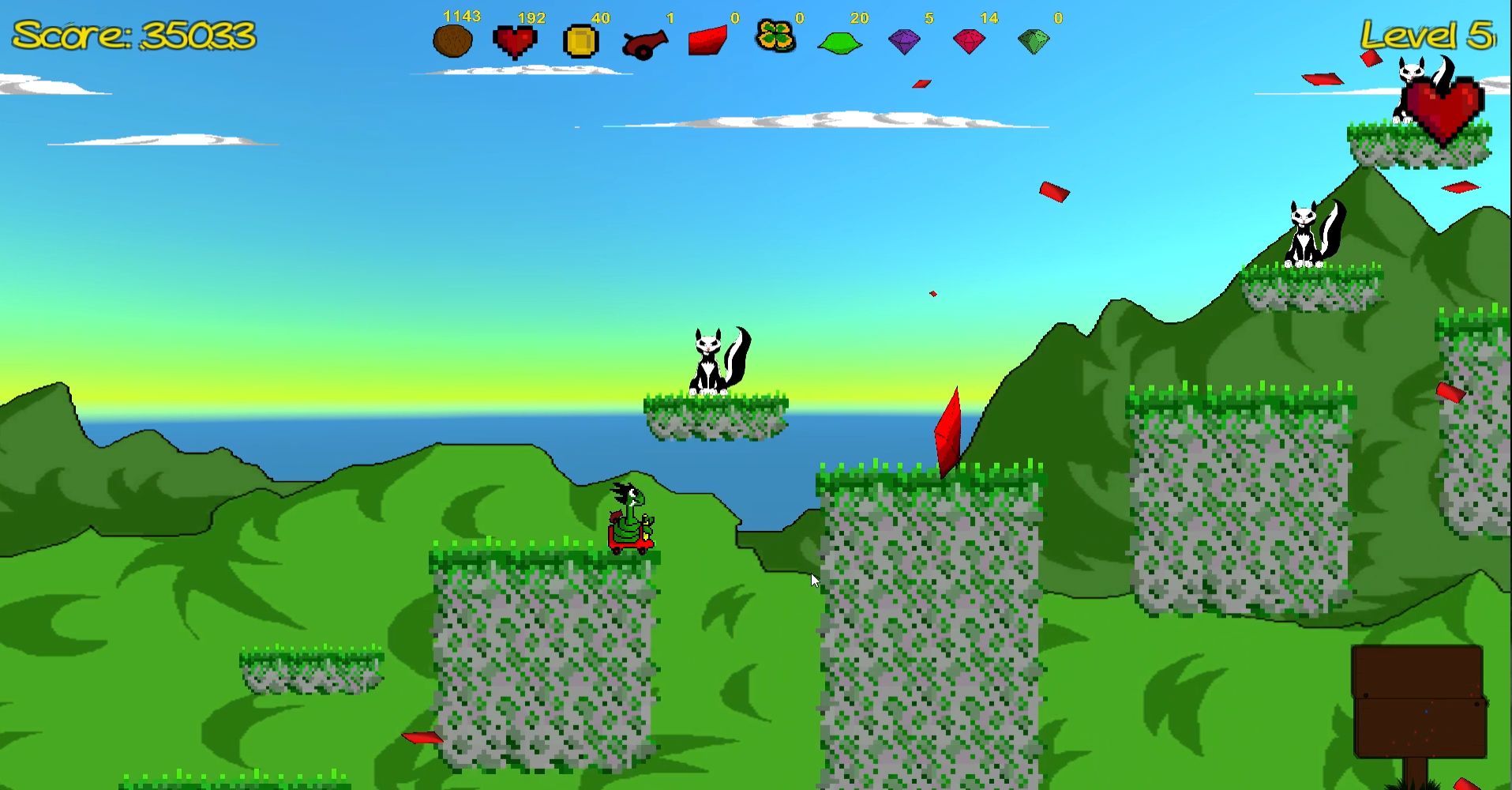 A pictorial glimpse into Stinky Snake’s journey through the Emerald Isle to free his family from Skunk, the leader of the skunks. With the ability to throw coconuts by one or more with the coconut cannon, to clear out the nearest ten skunks with a loss of health, to bump into skunks, to push skunks off the platforms without getting punched by skunks, and stomp on skunks–Stinky Snake is on the way to victory in finding his family and eliminating Skunk and all of his followers.

Our game is available on Steam in our storefront.

Find our user manual for the game appears here.

Check out our comics.

The way in which the game is designed is that Snake goes through the game from Level 1) Rendevous to 17) Harris’ with the objective of finding his family. Then after finding the family realizing that he cannot leave the island because of the “Curse of the Cart”. So to be able to leave the island and finish the game, Snake needs to solve this by going back to the beginning of the game. During the second round through the game, Snake has to go to the hidden levels to find people like Claude, the Pirate, the Hermit, and the Colonizer to get clues as to how to get the curse lifted.

There are huge treasure boxes that belong to the Colonizer that is left randomly throughout the game along with keys. These boxes are not accessible until the player has a key and have be given the quest by the Colonizer. The amounts of gold received is on the large side to help when the player falls into the sea water or have been attacked by a swarm of unhappy butterflies.

When the player dies after seeing the Colonizer you loose access to the hidden levels and have to go back through level 17 and refinish your mission to then go on to find up to all 7 boxes (or 70,000 or more coins on hand) and then return to the Colonizer to finish the end of the game.

These features added to the game which includes the following:

A new menu system added to the game shown in the following images.

This was added for Xbox 360 controller. The user will still need to use the mouse and keyboard for interaction with other characters in the game, as well as, navigating the main menu.

This is accessible from the Start Game first and will show up in the Level Select menu after. The basic mechanics is covered here with the pickup of coconuts and lives. The player gets to practice a double jump to pick the coconuts on the first coconut tree. Also the player can try jumping into the sea water. Here the player has to pickup and pick the coconuts to be able to exit this level.

Eight new levels have been added that are accessible after completing the first quest of the game–to find your family:

The prefix links these levels to a visible level of the same number. Example, 1. Pirate’s Lair is accessible from a whiskey barrel on the first level. Some of these levels are accessible either by a barrel or a monument.

These finds the player in the scene and bite. They only appear after the family is found and the player has learned their way through the visible levels. These can be eliminated with a coconut but they can hurt the player.

These are here for shear decoration.

Cannot hurt the player except takes the brunt of all the players inventory. So after exiting the Mill, the player can exit the game or restart the game going in the direction that the player wants to versus the linear path.

With the default difficulty level being set to normal, the Player can choose to set this to either Easy or Hard. For a less difficult experience, set this to easy under the Main Menu > Options > Controls. The boss interactions are based on difficulty levels as well. The more difficult, the more health the Boss will have, the more stomping and coconuts that will be needed to eliminate the boss.

Ways to hurt the Skunks

Some Odds and Ends

This is the Health Reload that refills the Health heart under the Level number. On some levels, a large pineapple does the same thing as well.

These are lives that you are collecting.

Take these to get to the next level in the game.

Stinky Snake, the video game is now on Steam.

Checkout Stinky Snake which is currently available on Steam at:
https://store.steampowered.com/app/773360/Stinky_Snake/

Stinky Snake is currently available on Steam, check it out at:
https://store.steampowered.com/app/773360/Stinky_Snake/